So it has been one week since we packed up the van and headed home to Savannah for good! It is great to finally be home and have our whole family reunited and under one roof again! We barely had time to unload the van, before Andy, Aidan and I headed to Jacksonville, FL for a VERY special night! It was Aidan's Brain Balance Graduation Celebration and a truly unforgettable night for our family!

Now, if you're familiar with my blog and our story, you know that we have BIG love for Zac Brown Band. Not only are these guys tremendously talented musicians, but they ALL have hearts bigger than the world, with room for all of their fans! ZBB promotes Brain Balance at their concerts, and it was at a Zac Brown Band show last summer (August 21, 2010 in Charlotte, NC to be exact) that I first learned of the Brain Balance Program. Just like this...


Never thought a concert could forever change my life, but that is exactly what happened. A little over a year later, Aidan has made such a tremendous amount of progress - a true miracle for our entire family! So it seemed very fitting that Aidan's Brain Balance Graduation Celebration should take place at a Zac Brown Band concert! He was SO very excited! We got there early - we had signed up to Z-Team before the show (That would be street teaming, Zamily style). We met up with T-Bird, our fearless Zamily leader, and she gave us our instructions. Our job was to greet everyone at the show, and make sure they ALL got a ZBB/Landshark koozie. (Aidan Pence was paying VERY close attention, as you will see later.) Thanks T-Bird! 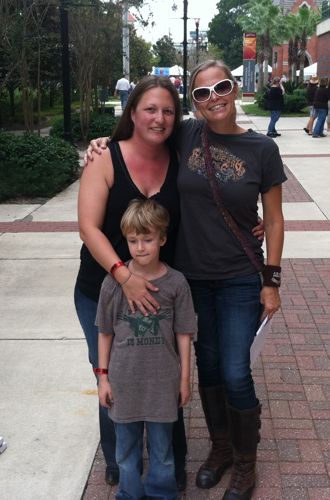 Our tickets to the show that night were a gift, one that we are extremely grateful for! We were also given an opportunity to meet the entire Zac Brown Band! This was Aidan's reaction to THAT news... 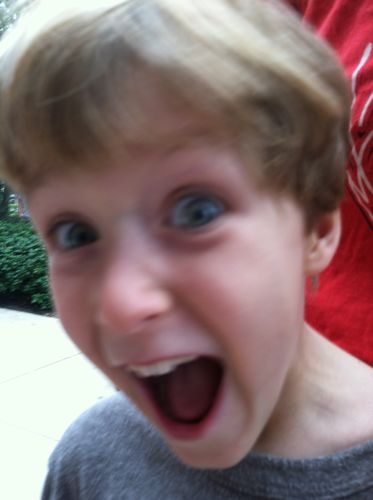 Before the show, we attended a legendary Eat and Greet, with amazing food by Chef Rusty Hamlin and the entire Zac Brown Band in attendance. At the Eat and Greet, we got the opportunity to introduce Aidan to Zac, Jimmy, Chris, Coy, Clay, Hop, and Wyatt - and it was AMAZING! Aidan and I went down the line, receiving big hugs, high fives, and tons of congratulations and kind words from each of the guys in the band. (For the record, I didn't cry this time, but I feel certain I had a big goofy grin plastered on my face!) The food was fantastic! Melt-in-your-mouth pork and beef tenderloins, golden beet salad, a parsnip puree that had Andy raving (he had no idea what a parsnip was, by the way), cole slaw, green beans, and a smack-your-mama good chocolate/peanut butter dessert! AWESOME! After we ate, Aidan and I got to check out "Cookie," Chef Rusty's traveling kitchen! I thought we were going to get a peek inside - we got a full blown TOUR! I've worked in restaurants with smaller kitchens. Cookie was super cool, and both Jessica and Chef Rusty had fun showing Aidan around! 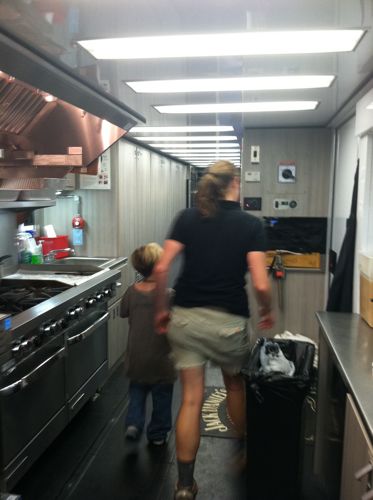 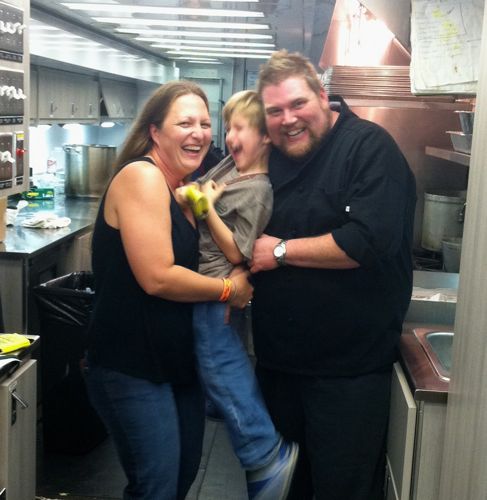 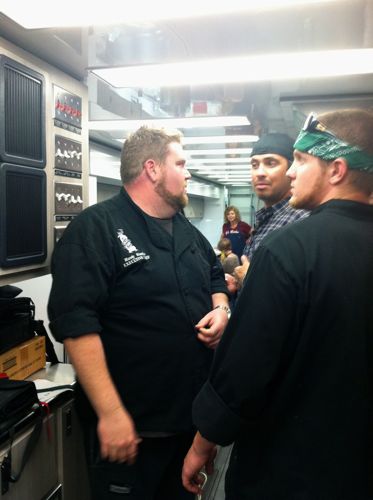 Aidan and I were greeted with big hugs by Mike Rizzi - Sonia Leigh's awesome drummer! He even taught Aidan a new secret handshake. Mike called Will Harrison (Sonia's guitarist) and Nic Cowan over for high fives and photos with Aidan! Awesome!
Will, Aidan and Mike 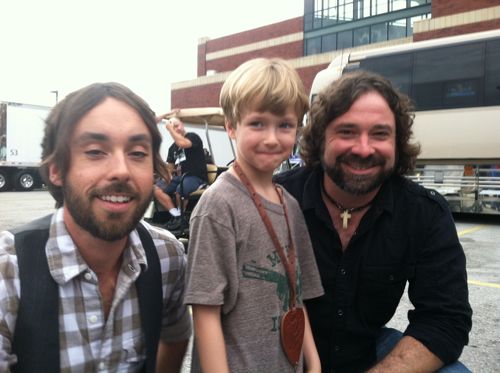 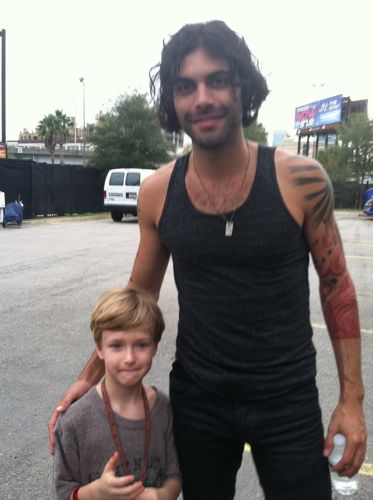 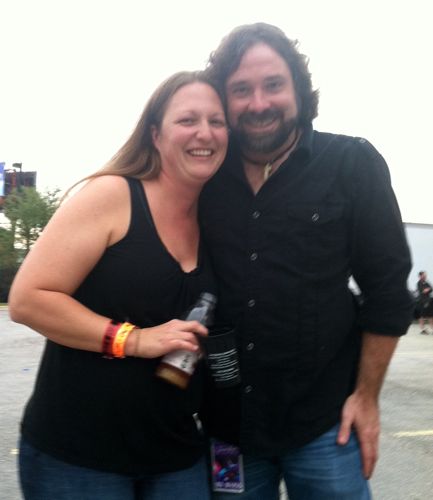 Aidan was looking for Sonia, and as soon as Mike found her, he brought her over! Aidan was THRILLED! 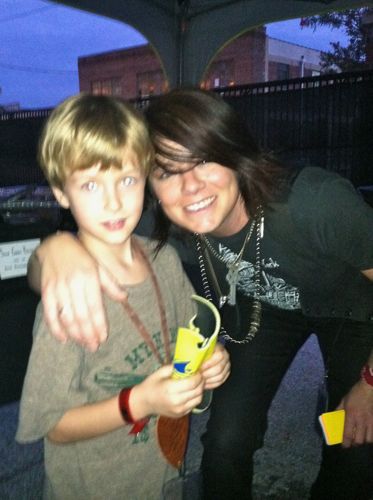 We got a few more photos at the Eat and Greet. Uncle Kyle drove up from Daytona to celebrate with us! Yay! 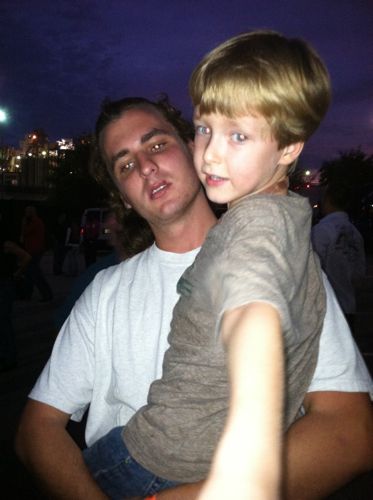 Aidan wanted a photo with Mr. Jack Daniels (ZBB's new tour sponsor), and I was happy to oblige. 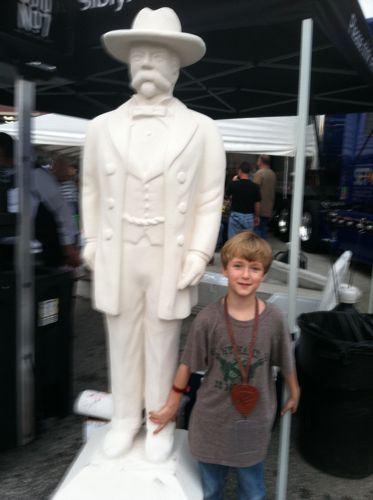 And Andy wanted a photo with Massif, Zac's bodyguard. 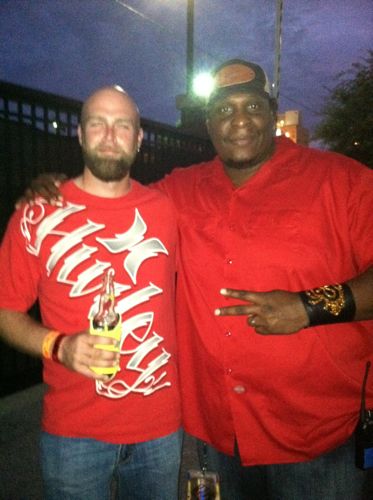 Then we headed out front to Z-team, a job that Aidan took VERY seriously. He was SO proud to be "working for the band," and no one was getting past him without a koozie! 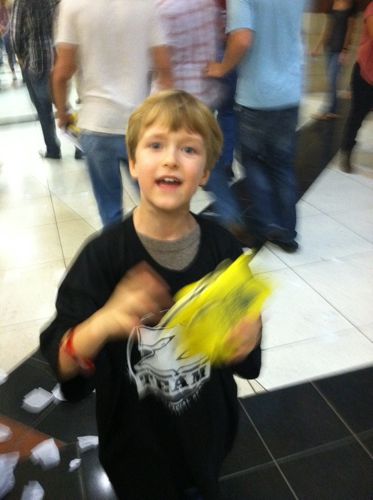 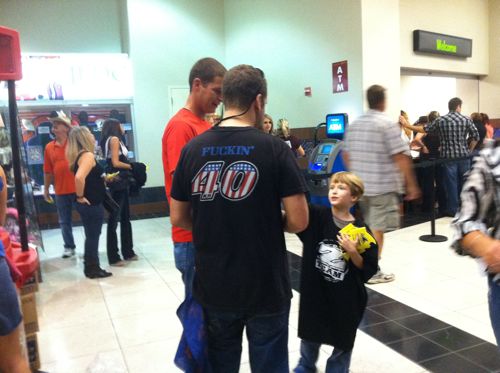 Several people wanted their pictures taken with Aidan - too cute! 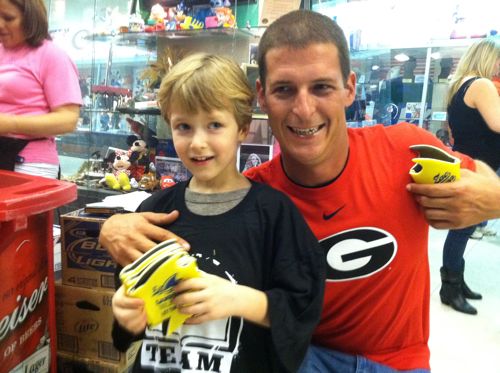 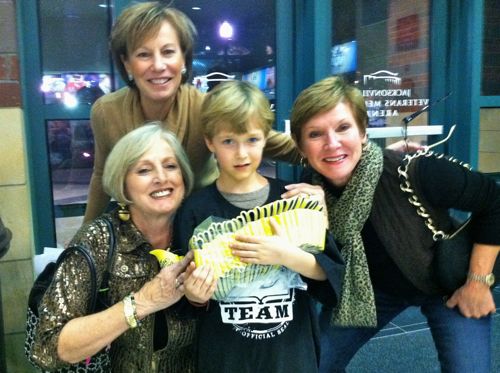 Z-Teaming was definitely a family affair that night! 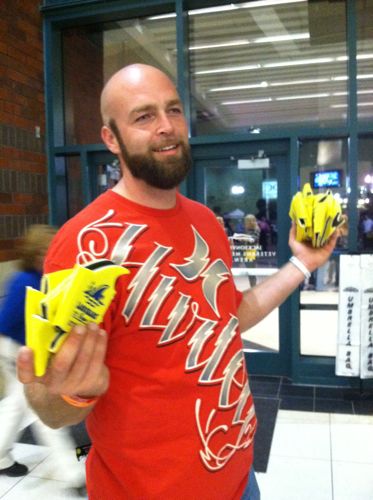 Even Uncle Kyle got in on the action! 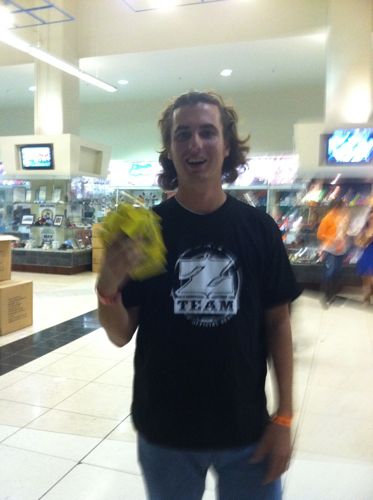 We missed all of Nic Cowan's set that night, and a chunk of Sonia Leigh's because we couldn't get Aidan to STOP passing out koozies. He was having SO much fun. Andy finally had to pick Aidan up and throw him over his shoulder to carry him to our seats for the show! The show, as always, was AMAZING! Zac Brown Band NEVER disappoints, and we had a blast singing and dancing the entire time! 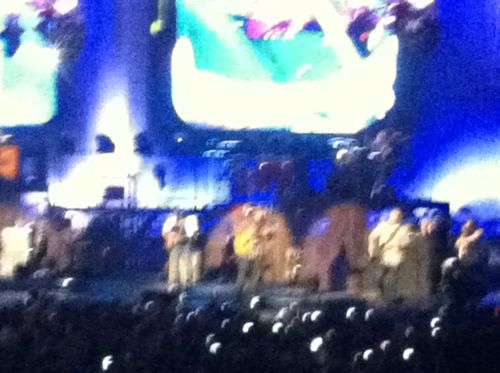 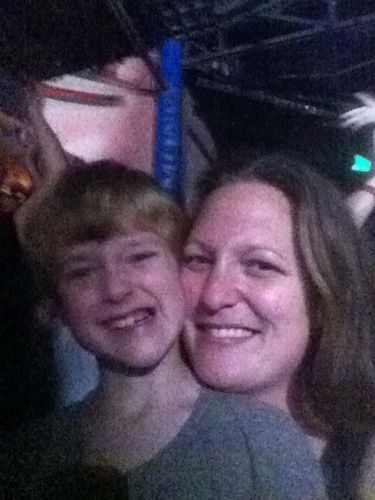 About halfway through ZBB's set, a lady tapped Andy on the shoulder and asked if we were Aidan's parents. When we said yes, she handed us a set of drumsticks - Mike Rizzi's drumsticks from Sonia Leigh's set that night!! I told Mike at the Eat and Greet what section our seats were in, and he made sure to find us and have the sticks hand delivered to us! How awesome is that?? Look at that grin! 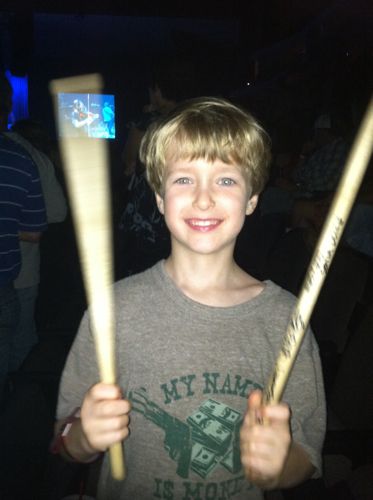 Rizzi, YOU are AWESOME! After the show, I met up with Wyatt for a big hug and one last treat - Aidan's Brain Balance Graduation photo, signed by Wyatt and the entire Zac Brown Band! What an awesome keepsake for our truly unforgettable night! 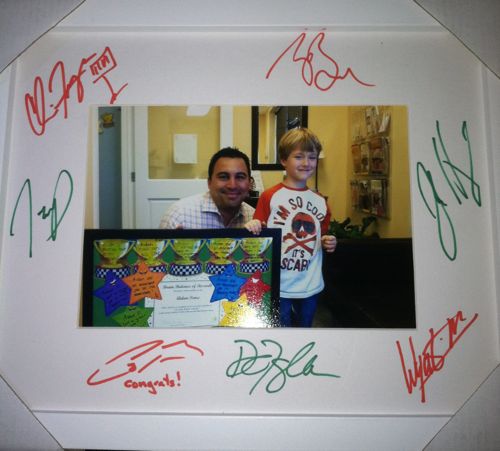 To Zac, Jimmy, Chris, Coy, Clay, Hop, T-Bird, Wyatt, Chef Rusty, Massif, Sonia Leigh, Will Harrison, Adam Holliday, Mike Rizzi, and Nic Cowan - Thank you ALL so very much for giving Aidan a truly memorable night to celebrate his Brain Balance Graduation. You guys (and gals) ALWAYS go above and beyond to make your fans feel like a real part of the magic, and it shows in everything that you do. The Pence Family really felt like the red carpet got rolled out for us last Friday night, and we had the BEST time!

I should also thank my Mom and Dad for keeping the little boys so that Andy, Aidan and I could celebrate! And a BIG thank you to my Aunt Gloria and Uncle Bill for the wonderful hotel room in Jacksonville!

And to everyone else out there, if you're not familiar with Zac Brown Band or the artists on Zac's Southern Ground Record Label, treat yourself and download a new cd or two today! Sonia Leigh, Nic Cowan, Levi Lowrey - they're gonna be HUGE! The only thing equal to the talent of the Southern Ground Artists is the heart and love for their fans! You will NOT be disappointed!

Check out the link to the right for Zac Brown's passion project, Camp Southern Ground. Or go to www.zacbrownband.com and click on "letters for lyrics" to write a letter to a soldier stationed overseas. Join the fan club, the Zamily, and spread the Zac Brown Band love. These guys support Brain Balance, because they believe in the program and they know that it works. They support our troops and appreciate their sacrifice. And they are building a summer camp for kids with special needs, to give these kids the same opportunities to play and have fun that other kids have. Amazing talent, great love for their fans, and big ol' hearts of solid gold! The Pence family LOVES Zac Brown Band!