Once again, I find myself playing catch up. And as I scrolled through my earlier blog posts, it occurred to me that I haven't told you about some of the subtle changes I am beginning to see in Aidan. I'll try and do that in this post. Don't worry - I'll tell you about all the fun stuff too, and I have lots of pictures and videos to share!

Aidan is making small, but steady improvements, almost daily. The changes are subtle, but definitely noticeable to me. Aidan is slightly calmer, in general. He still has bursts of hyperactivity, and they can still be very intense. But the periods of calmer behavior seem to be stretching out just a bit. His emotional outbursts and overreactions are still present, but seem to be slightly less intense and don't last quite as long. Three weeks ago, he would get SO upset over what often seemed like nothing, and simply could NOT stop crying at times. Rarely, we could talk him through a meltdown, but often, we would have to send him to his room to cry it out, which could take up to a half an hour. I still occasionally have to send him to his room, but not usually for more than five or ten minutes. And I can really see him TRYING to control his emotions, to stop the tears and use his words to tell me why he is so upset. This is pretty huge to me - that I can really see him making an effort to control his emotions.

The first week that we were here in Atlanta, every time we left a fun place (the pool, spray ground, museum, etc) was a nightmare. He tried to run, would scream and yell, sometimes all the way to the car, getting his brothers riled up in the process. I was really fearful at first that I'd never be able to take them anywhere by myself! We finally devised a system - if anyone pitches a fit when we leave, they earn a five minute timeout at the start of our next adventure. NO ONE likes to sit out for five minutes while everyone else has fun! We still have moments, but they are ALL much better, and I give them plenty of notice before we leave anywhere. We start counting down at 15 minutes, and usually, leaving is pretty smooth.

We've been working on our scents daily, and Aidan's sense of smell is becoming very sensitive. He is the first to notice if a diaper needs changing, or if I'm cooking something in the kitchen (or even taking something like fruit out of the refrigerator). And he is becoming less resistant to doing his exercises too, so that is very helpful. We break them up into 5 minute periods throughout the day, and he's getting TONS of very physical exercise almost every day, which is great!

So the last three days...We were so very lucky to have Hannah and Delanie with us through Friday morning this week! Wednesday morning, the boys rode their bikes around the complex with the girls in the morning. We dropped the girls and the little boys off at my Aunt's house to play with Alana, and Aidan and I headed to Brain Balance around noon. He earned another reward, this time a trophy! 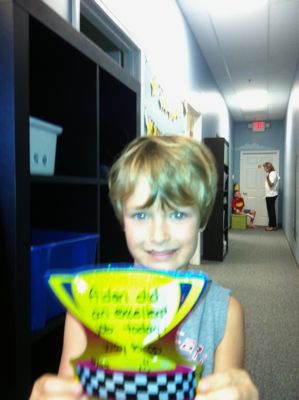 (There seems to be no difference between stars and trophies, and apples are used for completing books or levels in academics, usually) Sorry for the blurry picture - Aidan only gave me about three seconds to snap a photo, and then he was ready to go get a treat! Wednesday afternoon, the rain changed our plan for some pool time. After dinner, I brought out THE BOX, and the girls helped the boys make monster faces. Even Ash got in on the action - for some reason, I have NO photos of this adventure!

Thursday, Aidan had Brain Balance at an earlier time slot, so we left here around 10:30 am. The girls kept the little boys here at the condo with bubbles, sidewalk chalk, and their plasma cars (and helmets) to entertain them. I did some grocery shopping at Trader Joe's (my new favorite store) while Aidan was at Brain Balance. After his session, we headed home, loaded everyone up, and drove to Sensations for the afternoon. Sensations is a super cool sensory gym and the kids LOVE it! I think the girls had fun too! We got to play one last time with our new friends Brody, Wyatt, and Hazel. They are heading home to Utah this week and we miss them already! 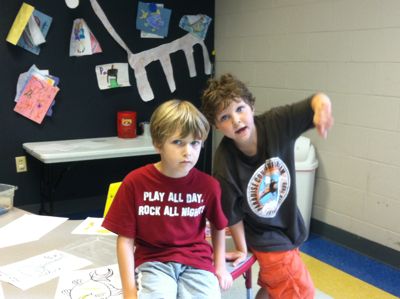 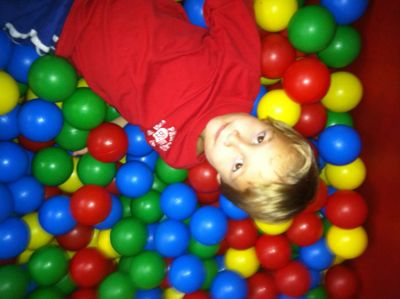 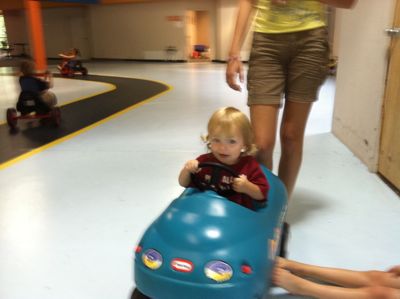 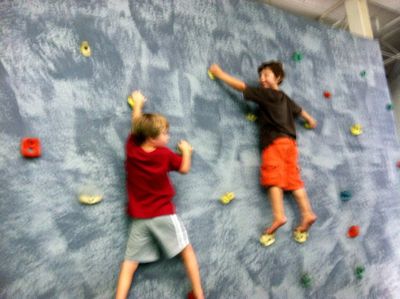 You see, the girls and I were on a mission - wear 'em out and no matter what, do NOT let them nap. I had plans with Aunt Gloria on Thursday night - a much needed little break and some good music from Nic Cowan at the Dixie Tavern in Marietta! Anyway, I wanted the little darlings to sleep for Hannah and Delanie, and our plan worked perfectly. They were ALL in bed for the night before I left with Gogi at 9pm. Amazing - almost never happens! The Dixie Tavern was very cool and the show was awesome. I even got to school a couple of military guys on the pool table - 'cause that's how I roll! We had a great time, and will definitely be back if the opportunity presents itself! After the show, Nic was nice enough to make a quick video shout out for Aidan - he was SUPER upset with me when he found out I was going to see Mr. Nic Cowan without him! Check it out - sorry you have to turn your head!

This past April, we took Aidan to a BBQ festival in Thomaston, Georgia to see Nic Cowan and Levi Lowrey AND to Clemson, SC to see Nic, Levi, Sonia Leigh and the Zac Brown Band play at the Southern Ground Music Festival! We're BIG Southern Ground Music fans in the Pence household! I'm afraid we've created a little monster! Thanks Nic - you made Aidan's day with the video!

Friday morning, we took the girls home (We ALL miss y'all!) and headed to Brain Balance. We ran a couple of errands and tried to swim Friday afternoon, but got rained out again. We put on our PJ's early and had movie night instead. And you all know about Saturday by now...;) Still crossing my fingers that my phone gets returned to Sensations sometime tomorrow! Today, I made a great breakfast and we headed to Gogi's for an early afternoon swim. We came home for a couple of hours to rest - NOT! and then headed back. The plan was dinner, poolside, but the weather did not cooperate. We ate at her house, came home, and watched a movie again! The boys are all sleeping and I'm heading to bed myself!