The calm before the storm....

"There's a calm to every storm but it's gonna get tougher, baby. So you've been warned." ~ Sonia Leigh (Check her out at www.sonialeigh.com - she is AWESOME!)

My last blog post was definitely the calm before the storm! Last Sunday evening, I was blogging about how calm and helpful Aidan had become...and Monday morning, a totally different kid woke up! Now I've read Dr. Melillo's book, "Disconnected Kids" and so I was aware that as the brain grows and gets reconnected, sometimes progress can look and feel like regression. I thought I was prepared - but knowing it and seeing it happen right before your very eyes are two very different things, apparently.

Monday and Tuesday, Aidan was all over the place - very emotional, very easily upset, fighting about doing his exercises (which had been fairly smooth, until now), acting very defiant and oppositional for no apparent reason. It was very frustrating. Thankfully, we had Delanie with us and we were still able to have some fun! Monday, Delanie and the little boys played at an indoor play place right across the street from Brain Balance, appropriately called PLAY while Aidan and I went to Brain Balance. He earned another reward, this time an apple for finishing the book that he and Ms. Jennifer were reading. 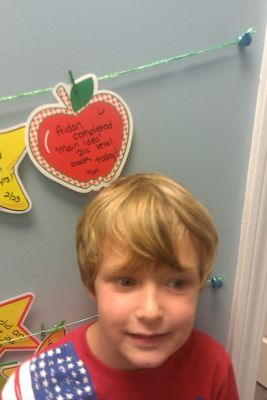 We even got a little pool time in that evening!

Tuesday, we picked up Alana and headed to Sensations for the morning/early afternoon, where I did not find my missing iphone, but I didn't lose Gogi's phone either! I also didn't take any pictures because try as I might, I could not make friends with Gogi's silly Android phone. But everyone had fun! We dropped Alana off in time for swim practice and headed home for a little rest. No one would rest, and I had an epic battle with Verizon over replacing my lost iphone. Long story short - they agreed to replace it for the cost of the insurance deductible and I'd have a new phone by Thursday. Off we went to Lawrenceville to take Delanie home. The boys played in the back yard with Hannah, Delanie and Zac, and Jessie was kind enough to feed us all an awesome chicken salad for dinner! (Thanks Jessie!)

Wednesday, the little boys and I played at PLAY while Aidan had his session at Brain Balance. After his session, I brought all three boys back to PLAY for an hour or so, and then we met Jessie to pick up Hannah. We got home to find a very nice surprise - FedEx had attempted to deliver my new iphone one whole day EARLY! Aidan and I ran to the FedEx office to pick it up and Hannah kept the little monsters. Thunder kept us out of the pool, but we were able to ride bikes and cars around the complex and get everyone settled down to watch a movie before bed. After the kiddos were sound asleep, I ran over to Gogi's to use her wifi to activate my new phone and return her phone to her that she was kind enough to let me borrow. YAY! Finally!

Thursday's mission was to wear the kids completely out - NO NAPS ALLOWED! Gogi and I had plans to revisit the Dixie Tavern to see Nic Cowan's last show there that evening! Hannah and I took the kiddos to PLAY both before and after Aidan's Brain Balance session that day!

During Aidan's session, I had a great mini-meeting with Dr. Pete Scire, and he explained the changes in behaviors that I had been witnessing this week. He began by telling me that Aidan was doing AWESOME in the program, working hard, putting forth lots of effort, and exceeding their expectations in almost every area! GO AIDAN! And then he gave me a warning - whenever brain growth and development begins to happen very quickly, as with Aidan, often times seemingly negative behaviors can result. So the behaviors I was seeing were right on target. He told me that I should expect to see intense outbursts of emotion, defiance, oppositional and button pushing behaviors from Aidan over the next few days and maybe even weeks. I should not, however, view these behaviors as "regression" but rather a necessary part of the process. The reason for this is that the two hemispheres of the brain do not grow and develop at the same time, but rather switch back and forth during the first few years of a child's life. Connections between the two hemispheres are formed at every stair step in the development process. When these connections are not made properly, the child ends up with one very proficient hemisphere (for Aidan, the left) and one very deficient one (for Aidan, the right) - this is the "Functional Disconnected Syndrome" that Brain Balance focuses on improving. Dr. Pete said that because of this disconnect, Aidan never really went through the terrible twos and threes properly. By effectively targeting and working his right brain, we have kind of given him a do-over in brain development. In a very short amount of time, he gets to quickly rework those stair steps of development, this time making the proper connections between the two hemispheres. Of course, it also means that he has to very quickly work through the terrible twos and threes, as well as fours, fives, and sixes again. The outbursts of behavior could be very intense, because of the speed at which he is moving through the stages of development. Brain development takes years, and the Brain Balance program is only 12 weeks, so a lot is happening in Aidan's brain in a relatively short amount of time.

After my meeting and Aidan's session, we headed back to PLAY for a little while. We even hit the pool afterwards! The monkeys were good and worn out, and were all sound asleep by 9pm! Mission accomplished! Gogi and I left for the Dixie Tavern and had a blast! Nic Cowan is a favorite artist of mine - you should check him out at wwww.niccowanmusic.com 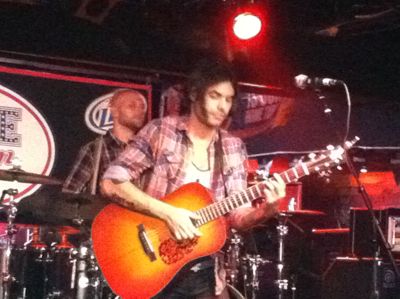 Friday morning we packed up the car and headed home to Savannah! We spent most of Saturday and Sunday on the beach, playing with cousins and enjoying the sand between our toes! My boys love the pool, but they REALLY miss the beach! 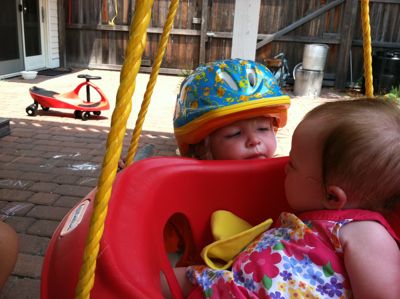 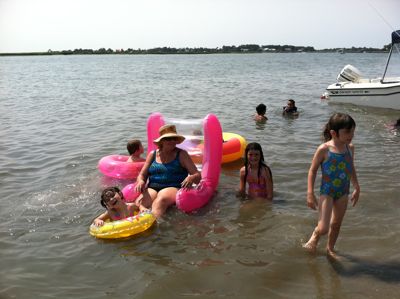 This was a most beautiful sight, leaving Tybee on Sunday! 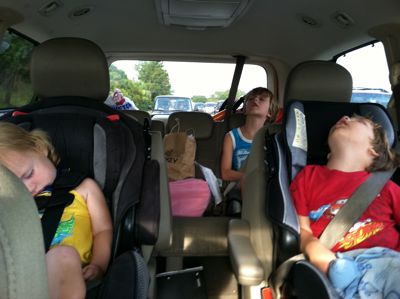 I will have to fill you in on the rest of our trip home, and this week back in Atlanta tomorrow. The kids are asleep, and it is way past my bedtime! Here's a hint - we had an extra special 4th of July!