LOTS of awards, a trip home, and a new blog feature!

It's been over a week since my last post, and once again, I find myself playing catch up! Before I get into all of our adventures, I would like to take a moment to let everyone know about an addition to the blog that you may not have noticed. On the right hand column, I have added a 'donation' button to the blog. (I have been told that if you read the blog in your email or on an ipad or e-reader, you can't always see the right hand column, so you may need to view the blog on your computer to see it.) We now know that Aidan will need an additional six weeks in the Brain Balance Program, and we have about two weeks to raise $2500 for his tuition. I have set up a secure paypal account for this purpose, and every dollar donated will be used to pay for Aidan's Brain Balance tuition. Many people have asked how to help us, and honestly, helping us offset the tuition cost is the very best way. Splitting up our family and incurring two sets of household and living expenses has been a huge financial burden for us, but the results have been so well worth the sacrifice. We know that the additional six weeks in the program will give Aidan everything that he needs to be successful and to reach his full potential. We are so very fortunate to have so many people loving us and supporting us on this journey - we certainly would not be able to do this for Aidan and for our whole family, without the amazing support of our families and friends. From cards and care packages (the boys LOVE getting mail) to donations, phone calls and emails - we are extremely grateful for ALL of the support that we have received! THANK YOU!

So now on to the good stuff! Last Tuesday, we had to wait for the glass repair man to come and fix the busted out window in the van. We ended up being stuck at home ALL morning long, and the boys were totally stir crazy by the time the repair man finally arrived. We amused ourselves in the condo parking lot with plasma car races down the hill! 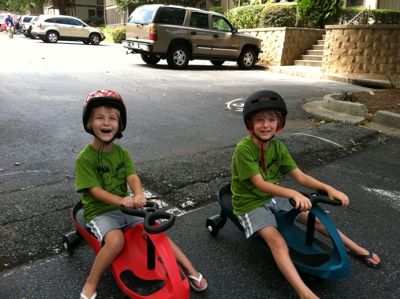 The boys even made me race Aeson - and Aidan shot this video! (Didn't he do an AWESOME job?)

Tuesday afternoon, we went to Yogli Mogli with Alana and Gogi, and then to the park. And a couple of AMAZING things happened at the park. First of all, Aidan is doing a great job lately of interacting with other kids, and asking them to play with him. He loves to play tag, and usually has a game going in the first five minutes that we are at the park. (AND he plays by the rules, AND he lightly tags the other kids when he's 'it' - no shoves or pushes - WOW!) So, amazing thing number one - when we get to the park, there are a couple of other kids playing and Aidan heads over to them to try and rustle up a game of tag. They're game, and a couple of minutes later I hear Aidan say "Hey Nicholas, do you think your sister wants to play too?" I elbowed Aunt Gloria - did you hear that? He called that boy BY NAME! (Up to this point, Aidan has NEVER asked anyone their name, and would even call out "Hey you with the yellow shirt" to get another child's attention.) So that was pretty cool. A little while later, Gogi and I were walking back from the bathroom and Aidan came out to meet us. I started to fuss at him for leaving the playground without Alana. He held up his hand and said "Mom, please don't be mad at me. I'm hurt." He lifted up his sleeve, and had a pretty wicked rope burn from his elbow to his shoulder. 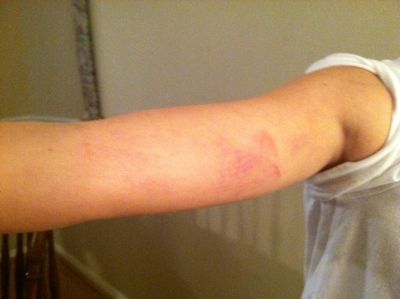 I took a look at it, and it was definitely painful, but not serious. I told him we could leave if he wanted to, but he said "no thanks, I'm ok" and went right back to playing with his friends. NO drama, NO tears, NOTHING. Astounding! But it gets better! Not ten minutes later, he and Nicholas were playing with a bumpy playground ball, and Aidan got bopped in the face. I saw it happen and thought, uh-oh here it comes. He runs over, bleeding lip and all, but still no tears. I checked him out and handed him a water bottle, and again told him we could leave if he wanted to. He rinsed his mouth, and ran right back to join his friends. As my jaw hit the floor! Not one but TWO injuries in ten minutes, and not one single tear or a moment of drama! AMAZING!!
Wednesday was a banner day, with Aidan earning TWO awards in one session at Brain Balance! (#16 and #17, if you're counting!) AWESOME! 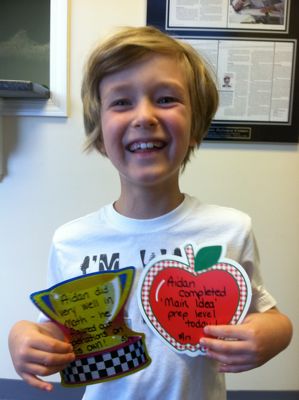 Thursday was our day off, and so we headed in to Atlanta to the Children's Museum for some F-U-N! 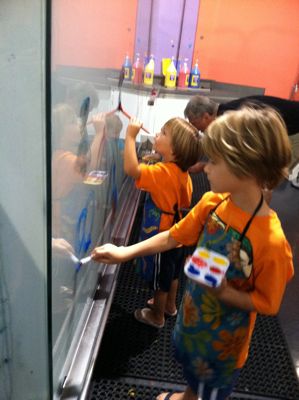 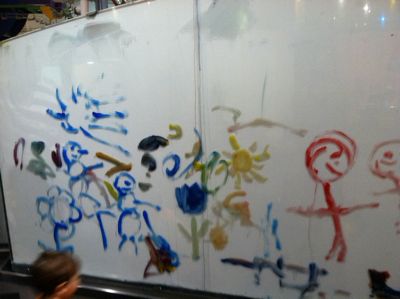 Friday, we went to PLAY place before Brain Balance, and the boys chose silly glasses as their prize for finding Mr. It (The silly monkey that hides in a new spot each day at PLAY place!) 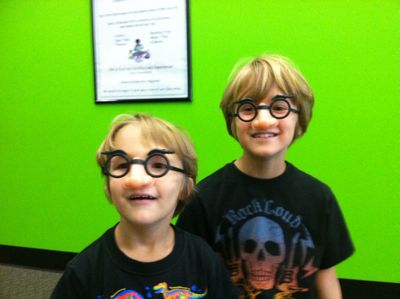 And Aidan earned his fourth award in three days at Brain Balance that afternoon! GO Aidan! 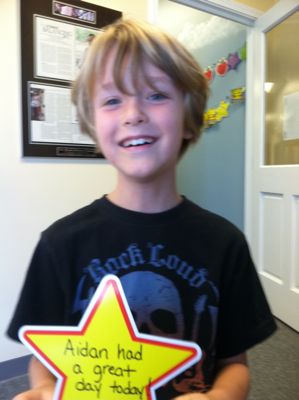 After Aidan's session, we headed home to Savannah! We were all ready to see Ash and Daddy! And everyone else too!
Saturday, Colleen and Daniel stopped by to play with the boys for a while, and everyone had a blast climbing and sliding and playing dodgeball! 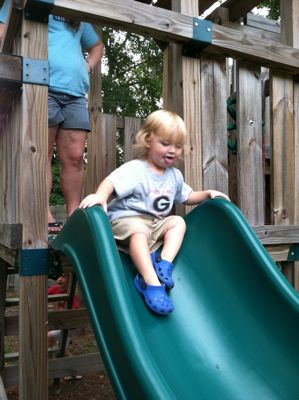 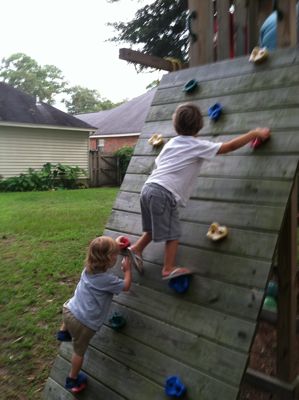 Ash is pretty sure that he can do ANYTHING his brothers can do - and most of the time, he's right (with a little help!) 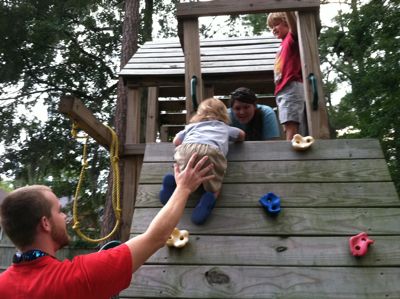 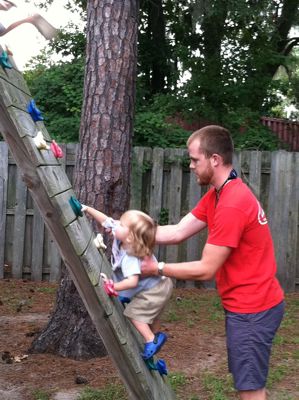 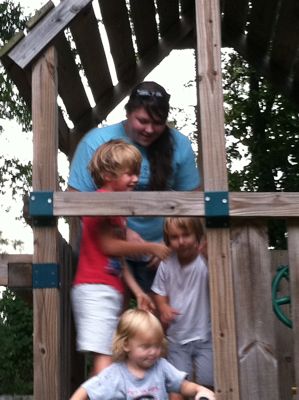 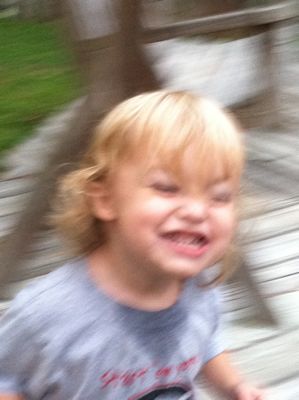 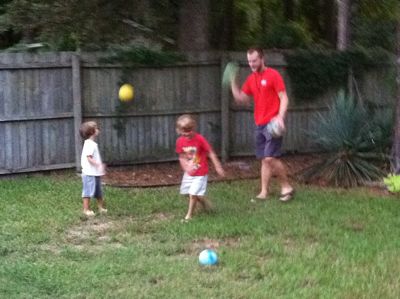 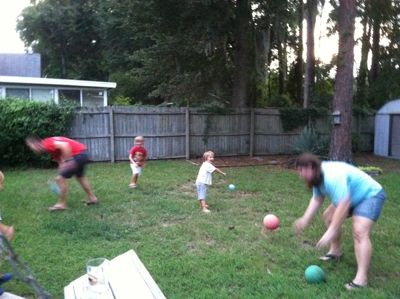 Sunday, Andy and Mimi took the boys to the beach while I nursed a very sore back at home. No pictures, but everyone had a lot of fun! And Mimi sent us some homemade spaghetti for supper, which the boys loved! (Andy and I loved it too - thanks Mimi!) 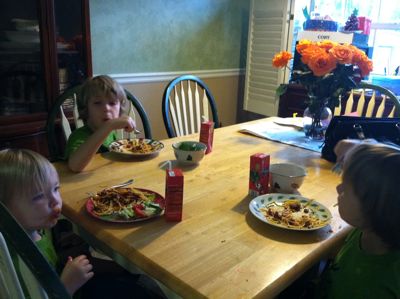 After dinner, we played outside with Daddy until the mosquitos drove us inside! 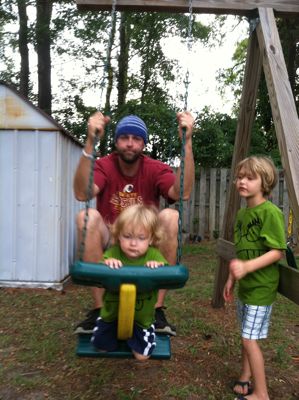 Monday morning, my little man started FIRST GRADE! He was a little nervous, but very excited to return to school (only for one day - he'll be back for good when we finish the program in October!) 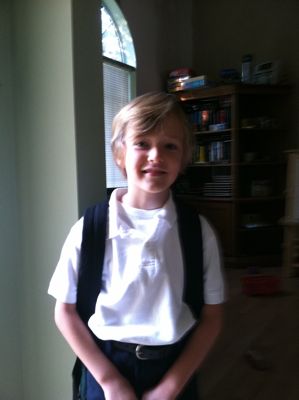 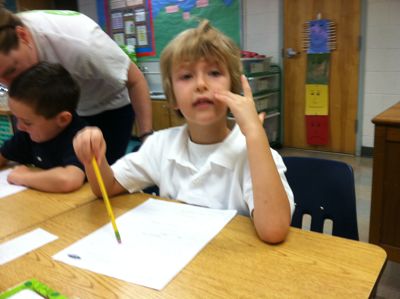 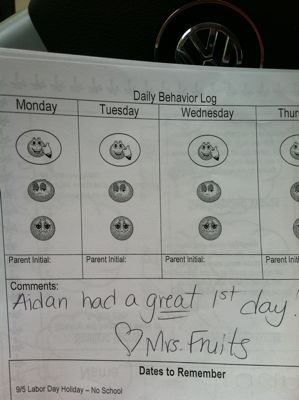 Monday afternoon, the little boys and I napped at Mimi's and played with baby Kayley while Aidan and Uncle Kyle went crabbing off a nearby dock. No pictures of the big monkeys' adventure, but I heard it was LOTS of fun! 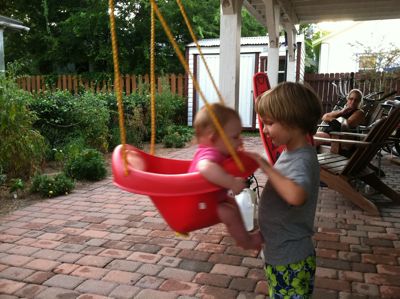 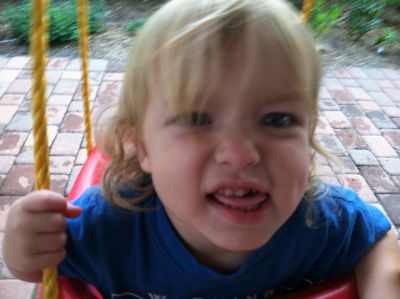 Tuesday, after many stops and starts, and LOTS of help, we FINALLY made it on the road back to Atlanta! (Thanks Aunt Cassie and Uncle Kyle and EVERYONE else!) The boys were AWESOME in the car - and I was a little nervous because this was my first trip alone with all three of them!
Today, Ash played at PLAY place while Ace had his assessment with Dr. Pete (more on that later, but it's very good!) and Aidan had his session at Brain Balance. Afterwards, we all played in the gym at PLAY place, stopped for a treat on the way home at Bruster's, all took a nap, had dinner and a swim before baths and bedtime. The monkeys are all sleeping like little angels, and the bed is calling my name!