So this post is going to be a little out of order. I usually try to keep things chronological, but I simply must share with all of you our adventures this past Saturday, and exactly what Brain Balance has done to help Aidan. Prepare to be amazed - I know I was (and still am!)

On Saturday, Aunt Gloria and I planned to take the boys to Stone Mountain for a concert and the laser light show. She found out that one of our very favorite Southern Ground Artists, the fabulous Sonia Leigh, was playing. We've been trying to catch a Sonia show ALL summer long, and this was our chance! Alana couldn't come with us, and I'll be honest - I was quite nervous about taking all three boys to Stone Mountain with just Gogi and myself. Huge, wide open area, a big crowd of people - throw in the fact that the laser light show doesn't start until after dark, and playing zone defense sounded a little scary. Gogi and I talked it over, and we decided we could handle it. Aidan had a rather rough morning on Saturday - fighting about exercises, picking on his brothers incessantly, and just being disagreeable in general. I very nearly pulled the plug on the day's adventures, but Sonia and Stone Mountain proved to be a great motivator, and Aidan worked really hard to regain his composure and managed to turn his day around. So off we went to Stone Mountain! 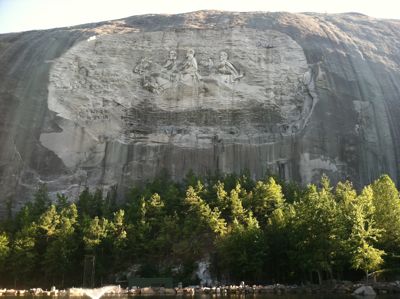 We found a spot right in front of the stage just before Sonia's set. It was AWESOME! We all sang and danced and had a blast rocking out to Sonia and her band! 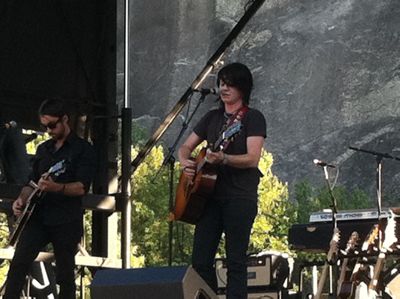 Afterwards, we headed over to the merchandise booth to see if we could score an autograph. We got SO much more! Aidan got a big high five and a hug from Sonia, a signed poster, a photo, and she was the first to sign his Brain Balance T-shirt! Thanks Sonia - Aidan is still talking about meeting you! 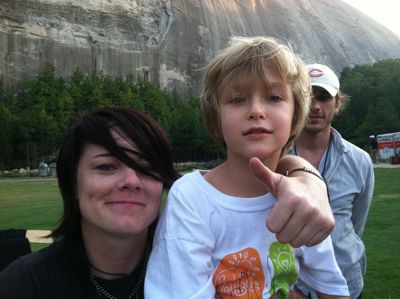 Ok, so here is where the day went from awesome to completely amazing! After Sonia's set, we moved our stuff over to the right of the stage. There was a big open area in the shade (man, it was HOT!) where lots of kids were playing. The space was about the size of a football field, maybe not quite that big. We gave the boys their parameters - don't go past the sidewalk, the woods, the local radio station's tent or the stage. For the next TWO hours, that is exactly where all three of them stayed! The big boys played with several groups of kids - tossing balls, playing catch, just running around and being goofy kids. Not ONE single incident for Aidan. Not ONE! The ENITRE time! Also, he NEVER wandered out of the area, not ONCE! THIS HAS NEVER HAPPENED BEFORE! Now Aidan isn't a runner, but he tends to wander. He has never before been very aware of his surroundings, and where he needs to stay. I have always been scared to take all three boys somewhere wide and open for this reason. Not only did Aidan stay in the area, but he kept a close eye on his brothers, and several times herded one or both of them back towards Gogi and myself. A couple of times, he saw me looking around and waved or called out to me to let me know where he was. I have NEVER before gotten to sit on a blanket and just WATCH my kids play in a wide open place. AMAZING! We had a picnic dinner, and after the sun started to set, a nice breeze kept us cool. Ash took turns loving on me and Gogi, and chasing after his brothers. 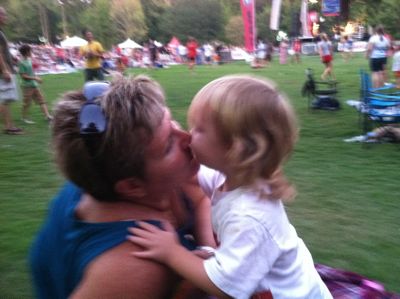 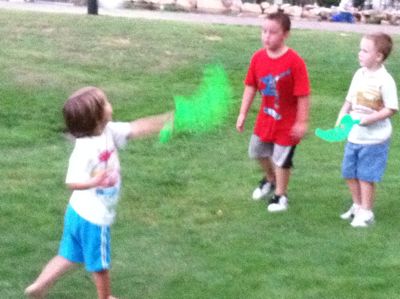 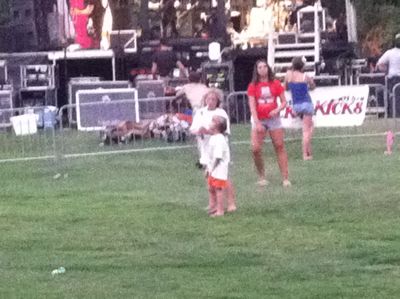 I'll admit, I got a little nervous after dark. But Aidan and Ashwin had each scored a bright blue glow in the dark necklace from the radio station's tent, and I bought a couple of glow in the dark bracelets for Ace from a sweet kid with plenty to spare. We had NO problems getting all three boys to sit still on the blanket and watch the show. They were totally enthralled with the laser light show! (It was pretty cool!) 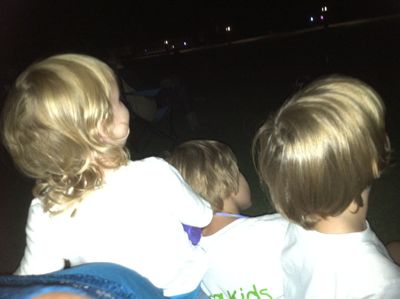 It was a truly wonderful day! I've said it before, and I'm sure I'll say it again - BRAIN BALANCE IS TRULY AMAZING!

So, back tracking a little - on Friday, Aidan earned not one but TWO awards at Brain Balance! ROCK STAR! 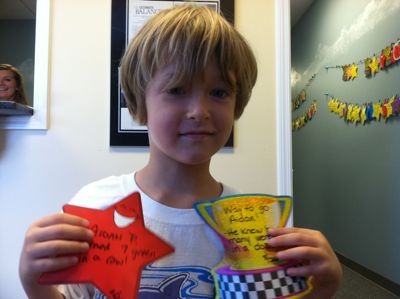 Sunday, we had a very lazy day. We were all a little worn out from Saturday's adventures. we played at PLAY Place for a couple of hours, and the boys had fun clowning around for photos! 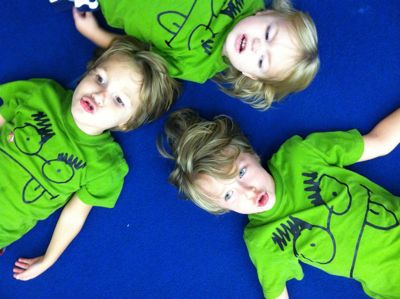 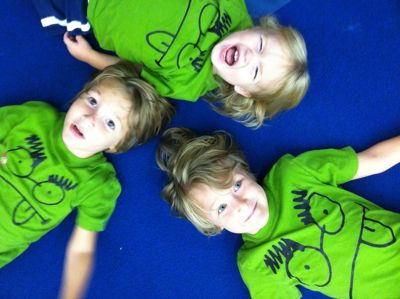 Aidan is so happy these days, and it is such a wonderful thing to see! 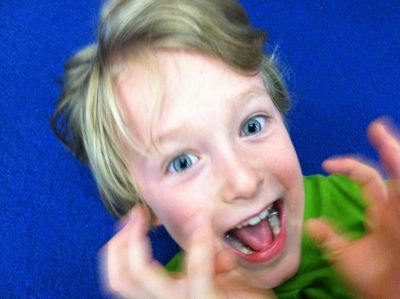 Everyone (myself included) took a great nap on Sunday! That evening, we had a swim and dinner poolside with Gogi and Alana! All in all, a super great weekend in Atlanta!

Monday, we headed back to Roswell for some PLAY place fun and Brain Balance. Aidan earned yet another award (his 21st!) on his last official day of this Brain Balance session. GO AIDAN! 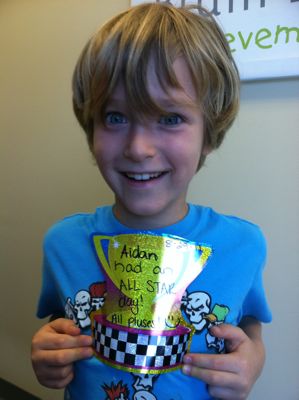 After Brain Balance, we played a little longer at PLAY place - I was on a mission to wear out the monkeys! Aunt Gloria and I had plans to attend a fund raiser at Tavern 99 in Buckhead. Two of Levi Lowrey's band members were hit and very seriously injured by a drunk driver on July 31, 2011. These guys are both musicians with no health insurance and families to support. Levi put together a special night of music to help raise money to pay for their medical bills, and Aunt Gloria and I were happy to support the effort. The lineup of musicians was unreal - lots of Southern Ground folks (John Hopkins, Clay Cook, Coy Bowles, Wyatt Durrette, Sonia Leigh, Nic Cowan, Blackberry Smoke, Levi Lowrey), and other local musicians volunteered to play to support the cause. The music was FABULOUS and we had an absolute blast, singing and dancing until the wee hours of the morning! 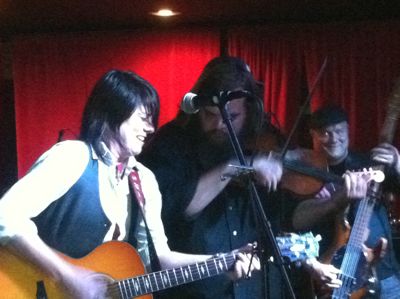 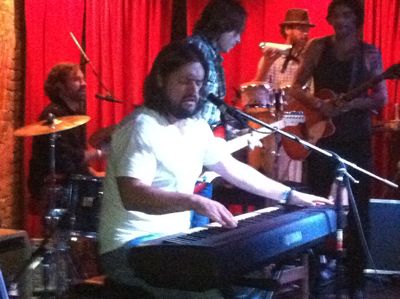 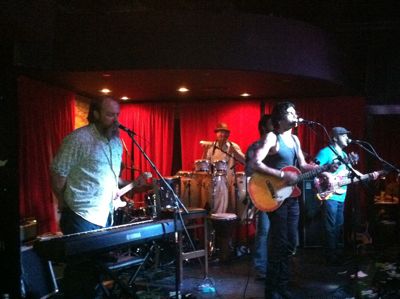 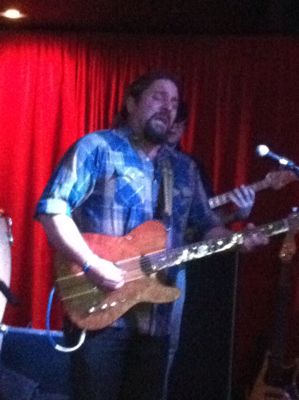 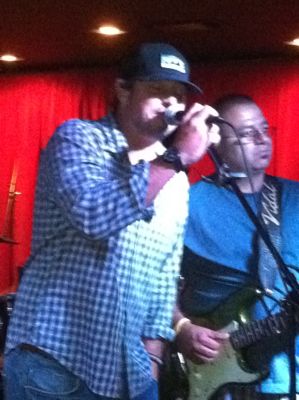 I brought Aidan's Brain Balance shirt with me, and everyone was happy to sign it for Aidan. I also made a connection that I think will bring my little man something very exciting in October! More on that later - fingers crossed! Aidan was THRILLED with his shirt - he didn't know I had taken it and was totally surprised! 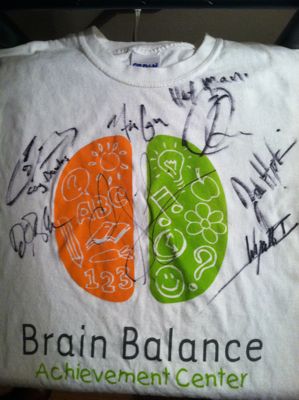 So now I'm gonna hijack Aidan's blog to show you all the fun that I had that night! I am SUCH a fan of ALL of these artists, and it was AWESOME getting to chat with all of them one on one. THey are ALL such talented musicians, and they could NOT be more gracious to their fans - even the crazy star struck ones! A BIG thank you to my Aunt Gloria for insisting that I get pictures, and for playing photographer! You ROCK Gogi! 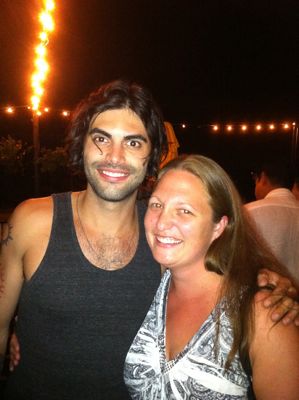 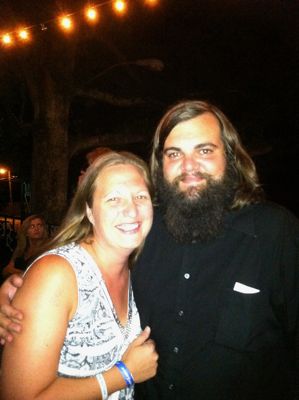 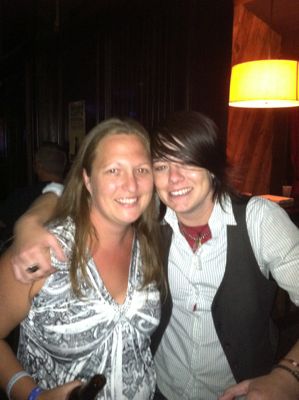 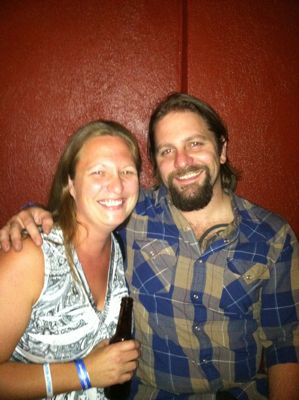 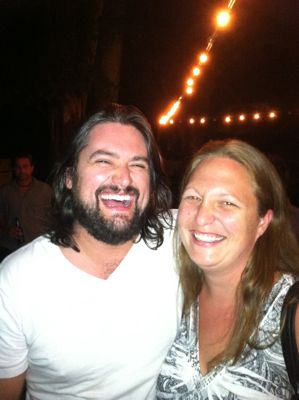 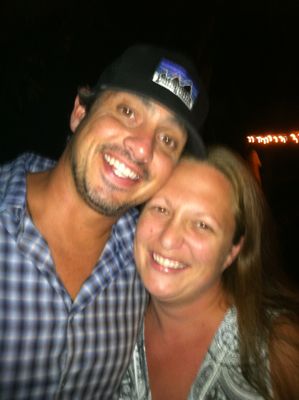 Somehow I missed my photo op with John Hopkins, but I'll catch him next time! All in all, a pretty fantastic night for THIS girl!

If anyone would like to help support Levi's efforts for his band members, you can make a donation on his website at www.levilowrey.com There will also be an online auction of some pretty cool stuff (everything from signed guitars to signed photos) on his website sometime soon. ALL donations and the proceeds from the auction go directly to Billy Wilkerson and Ron Bailey (the two injured band members). Please check it out!

Tuesday and Wednesday, Aidan had his assessments with Brain Balance while the little boys played at PLAY place. I'll be speaking with Dr. Pete in the next day or two regarding his results, but we have already decided that Aidan will definitely benefit from another 6 weeks in the Brain Balance Program. We still have a long way to go to reach our goal for his tuition, and any and all support is very much appreciated. I can't wait to meet with Dr. Pete and see just how far Aidan has come during these last 11 weeks! Brain Balance has without a doubt been the smartest thing we ever did for Aidan, and the best investment we have ever made in his future. We are so grateful to Zac Brown Band for promoting this program, to Dr. Pete and his staff at the Roswell Center for working so hard with Aidan, and to our families and friends who have supported us on this incredible journey!

Tomorrow, we head home for almost a week! A little break and some much needed downtime with Andy and the rest of our family! We are very much looking forward to being HOME! But we are very excited about the next 6 weeks with Brain Balance, and all of the fantastic results that Aidan is sure to achieve with a little more time in the program. We hope everyone has a safe and relaxing Labor Day weekend, and we'll catch up with y'all soon!