Well, I hope everyone is enjoying the "new" format - frequent (ok, still need some work there) and brief (I'm staying right at 600 words per post) with LOTS of pictures (ZING!)

Back to business...Last Monday (10/3) began at 6 am (3 days in a row boys, really? REALLY?) Anyway, we did lots of art projects in the morning, and went out in search of more pine cones before lunch. I swear, I have no idea what the recent fascination is with pine cones - and we haven't done a single project with them yet either. But still, we must keep collecting them. (Side note - we have to walk up a fairly steep hill to get to "the spot" and each kid totes a box or a bag, so I call it "exercise." And while they sleep, I chuck a few pine cones a day back over the fence. No harm, no foul.)
After lunch and a very brief rest, we headed to Roswell for Brain Balance. Aidan had a great session, and earned a reward for the wall! GO AIDAN! 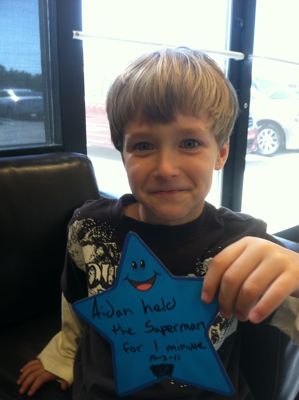 While Aidan was at Brain Balance, the little boys and I ran to Trader Joe's. Aeson was immediately drawn to their new display of...(drumroll please)...PUMPKINS! He demanded a photo, so after I got a "please" he got his picture taken! 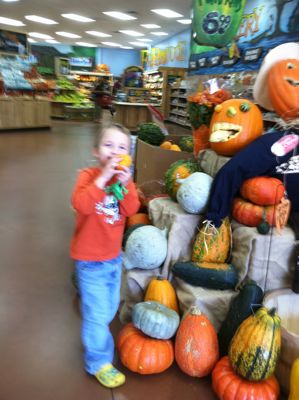 After Brain Balance, we all headed across the street to PLAY place. Thank goodness we took this cute photo on the way in (we had to have a group photo with THEIR pumpkin display). Monday was not a fun day at PLAY place for the Pence clan. Aidan was playing too rough with the other kids, running around and barreling into tiny people. Very not good. He would not listen, would NOT come when I called him, and would NOT settle down. I moved us from the gym area to the creative play area, to see if that might help calm him down. Nope, that didn't work. I warned him three times that if he did not settle down, I would give him a "rain check" for his Dollar Store trip that day, and we would leave PLAY place. (FYI - Aidan earns $3-4 to spend at the dollar store every time he gets an award at Brain Balance. But he has to keep it together in order to redeem his reward. If not, he gets a "rain check" to redeem his reward on another day, when his behavior is as it should be. But he never loses a reward that he has earned.) Anyway, he wouldn't settle down, and when the words "rain check" crossed my lips, he lost his little mind. Thank goodness we were the only ones in the creative play area at that time! He had a total meltdown, right there in the middle of the room. Crying, kicking, screaming, throwing toys - it was awful. I finally got him calmed down, but it took several long minutes, and we left. Now I didn't have his behavior chart with me, so I couldn't take each star off during his meltdown - watching the stars come off of the chart one at a time will often snap him back to attention. He does NOT like to lose three stars and fall down a level. Anyway, I made it clear to Aidan that he was NO longer on level three. So there would be no TV for him that evening. And I stuck to my guns, too. After baths, when we usually watch a little SPROUT before bed, I lined them up on the couch and read books until they all passed out. Mom = 3. Monkeys = 0.

Tuesday morning began at SEVEN am - thanks boys, Mama needed THAT one! And Tuesday was a MUCH better day, all around. We went to the chiropractor, redeemed Aidan's reward from Monday at the Dollar Store, and headed to the local library for Story Time. The theme was "stranger danger" and Officer Boyd from the Sandy Springs Police Department and McGruff the crime dog gave a very enthusiastic and entertaining presentation. The boys had a blast, and Aidan kept it together. (i kept his star chart handy ALL day, and most times, a warning was sufficient to bring him back down a notch.) 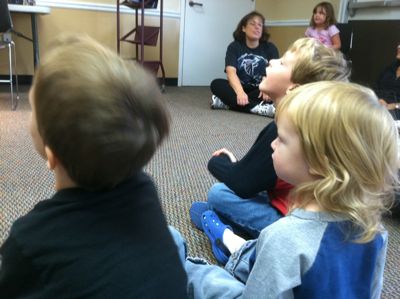 Ashwin was first in line to say 'hi' to McGruff, with Aidan right behind him. Aeson wasn't having any part of the big scary dog, though! (And poor McGruff really tried!) 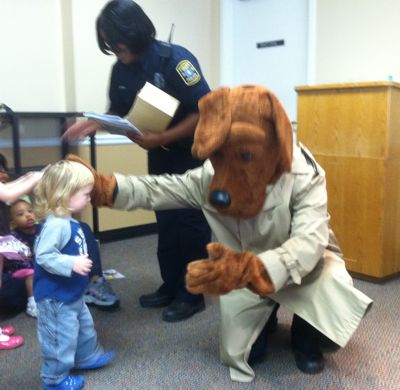 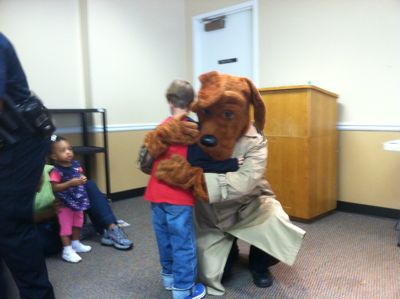 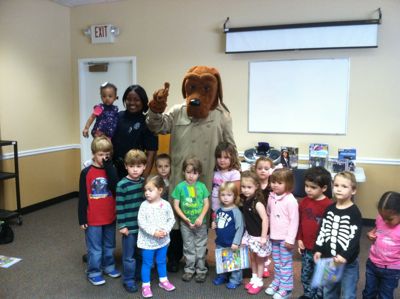 Everyone loves a bubble song! 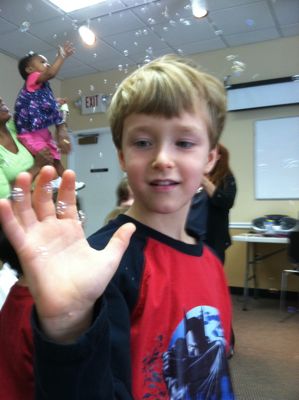 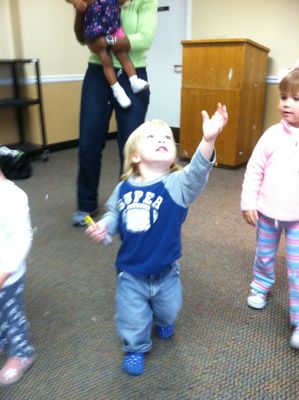 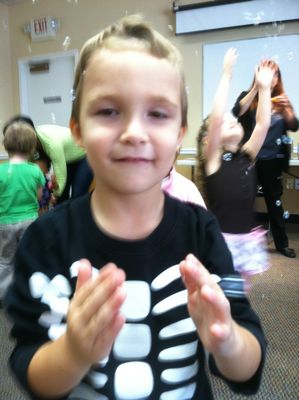 The boys all took great naps that afternoon, and after dinner, we played at the park for an hour or so. An all-around good day, that got a little bit better that evening. I was thumbing through Aidan's journal, and I stumbled upon his entry from his Brain Balance session the day before. Check out how sweet my little boy feels about his Mama! 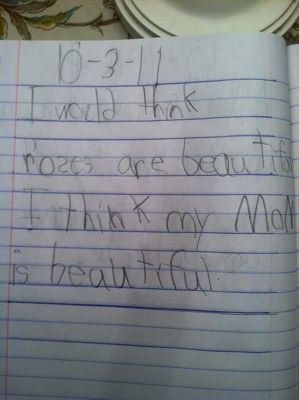 Thanks baby boy - Mama needed that one! And now, I'm a little (ok, maybe a little more than a little) over my 600 word goal, so I'm signing out. More to follow soon. I WILL get caught up - and VERY soon!