Ok, so I have 38 minutes to myself (the little boys are at PLAY place, and Aidan is at Brain Balance), and my battery is at 21% - so we're gonna see just how good I am under pressure! Picking up where I left off...

Tuesday morning, we went to story time at the Sandy Springs library. The theme was "fire safety" and a few very nice fire fighters were there...with a fire truck! The boys were in heaven! 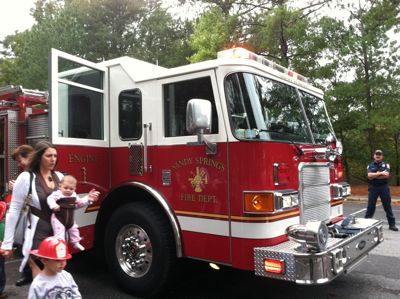 First, the firemen showed the kids what they look like all suited up - I never realized just how scary fireman look in their full gear. 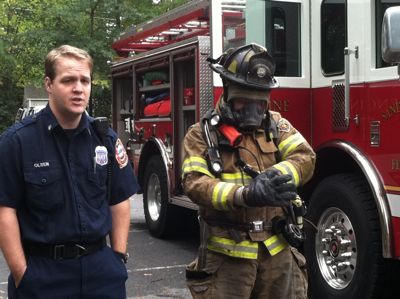 Everyone got to climb INSIDE the fire truck - very cool! 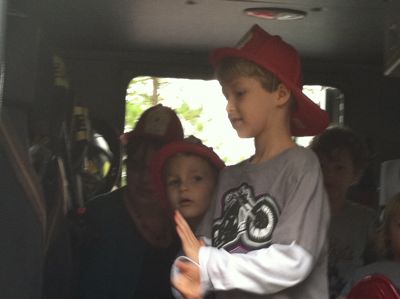 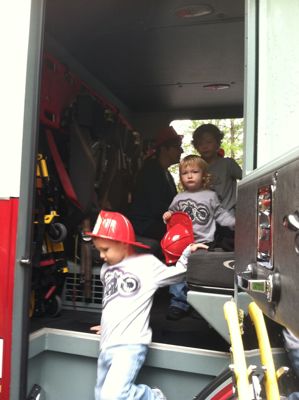 And of course, everyone got a fire fighter's hat to wear! 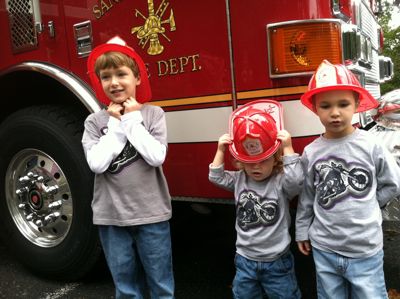 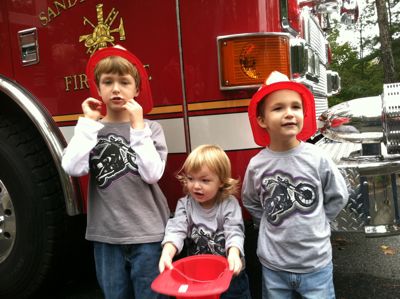 After all of the excitement outside, it was very difficult for all three of my monkeys to settle down for the story. Very not good. I rounded them up and we left the room, and we very nearly left the library. But everyone calmed down, and I agreed to one more chance. And then, the kooky library lady played the bubble song, and everyone was happy! 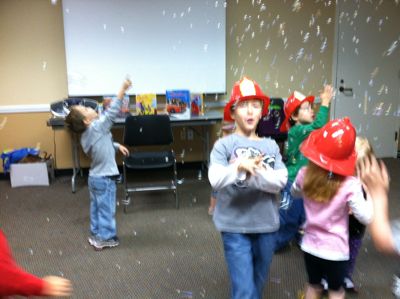 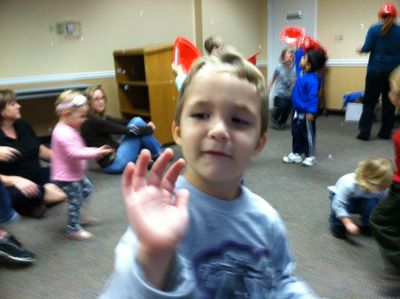 Ash was NOT happy when it was time to go! 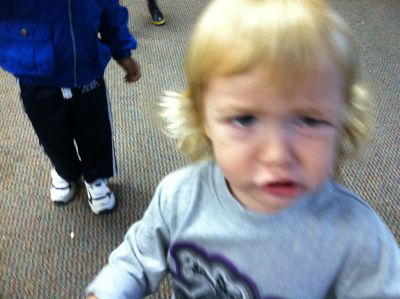 After our fun morning, everyone was ready for lunch and a great rest (Mama included!) Aidan woke up first, and did his school work like a champ! His attention and focus have improved GREATLY! He probably worked for at least 45 minutes straight that day - no whining, no complaining, AWESOME! His reading skills are improving every single day too. (He now reads a story to his brothers at least once a day - usually at bedtime, and they LOVE it!)

That evening, we headed to Kroger for some groceries, and everyone was very well behaved. I never thought that the day would come when I didn't dread the thought of taking all three monkeys grocery shopping, but that day has finally arrived! Ash and Ace ride in the buggy, and Aidan walks with me. And he doesn't run off. And he doesn't touch EVERYTHING we pass. And he doesn't throw a fit in the middle of the store when I tell him he can't have something that he wants. It's pretty amazing! We had a few rough moments (just MOMENTS) on Tuesday, but all in all, it was a pretty fun day with my boys!

Wednesday morning, we headed to the park to play after breakfast. My boys SO love the park! And watching Aidan engage appropriately with other kids is yet another little miracle that this Brain Balance journey has brought us. He asks kids their names, invites them to play tag or hide and seek, plays by the rules (the REAL rules of the games, and not the ones he makes up on the spot!) He even helps his brothers play along too! AMAZING!
This is how we do it... 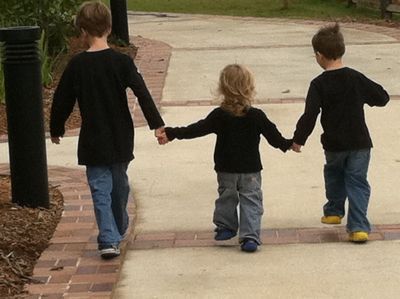 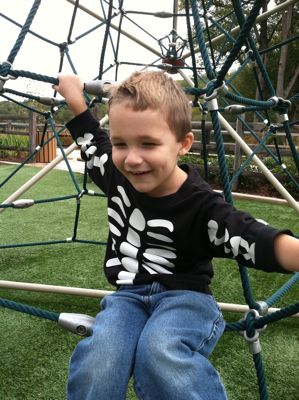 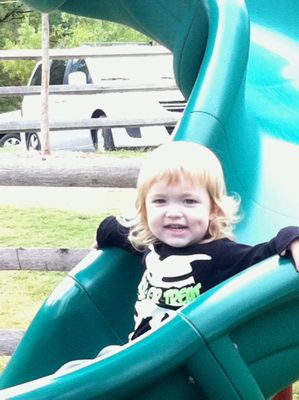 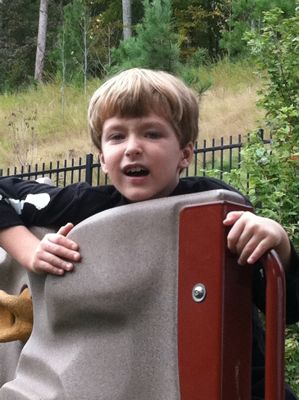 A week or so ago, we were at the park and Aidan was playing with a group of kids that had been there a couple of days in a row. They were having a ball, running around and being silly. I started paying attention to WHAT they were saying - they were role playing, using their imaginations like crazy. The playground equipment was a castle, they were all knights and princesses trying to slay the dragon, and they were all avoiding parts of the grass (because that's where the lava was, of course.) Oh, and they would all run away screaming from the "hairy scary monster" who, by the way, was Ashwin. (Ash LOVED this - that he was scaring the big kids!) Aidan has NEVER played like this before, and it is absolutely how kids his age are SUPPOSED to play. Wow, just WOW!

That afternoon, the little boys went to PLAY place, Aidan had a great session, and I had an AWESOME meeting with Dr. Pete about ALL of the progress that Aidan has made. (That meeting deserves a dedicated blog post, and if I have to stay up all night long, I will post it tonight! Prepare to be AMAZED - I know I was!) We all played for a while at PLAY place after session, and the boys made cute pumpkin crafts that evening. (Again, not flashing here and ruining the surprise - got a mass mailing going out later today!) And we watched a movie before bed - another GREAT day for the brothers Pence!

Thursday morning, we headed to PLAY place for story time! Ms. Colleen (the director) does a super fabulous job, and the kids really enjoy it! The theme this week was "on the farm" and my little singers loved belting out Old Mac Donald and making all the silly animal noises! 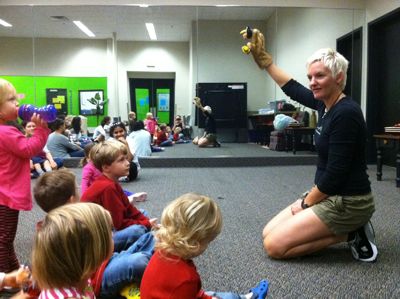 And there was crazy dancing, with scarves... 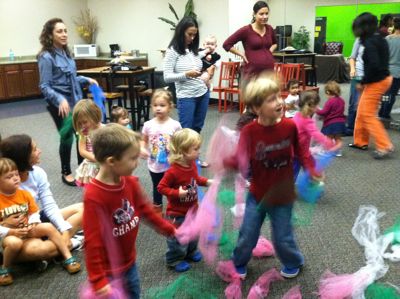 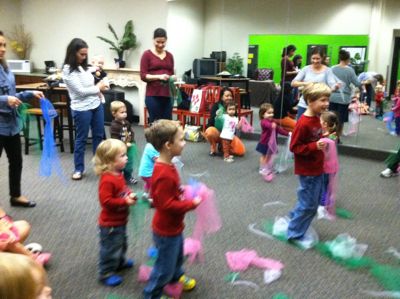 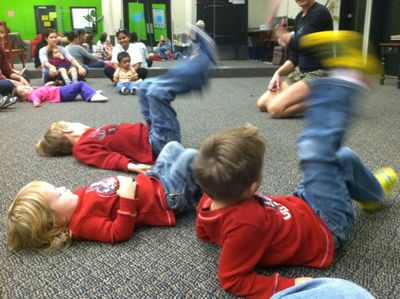 And of course, BUBBLES! (Apparently, no story time is complete without bubbles!) 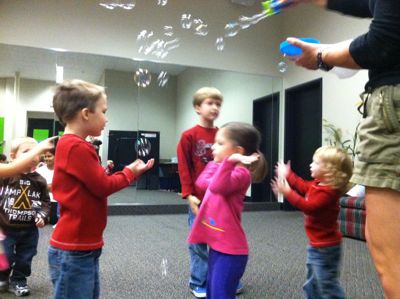 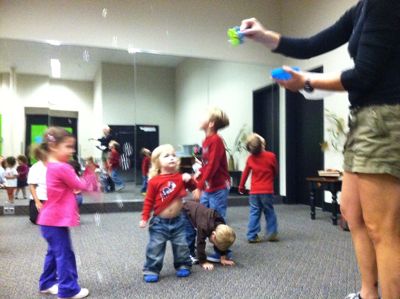 Great lunch and rest afterwards, followed by a pretty easy trip to Whole Foods. (We were out of pepperoni - GASP!)
On the way home, we stopped at a local pumpkin patch, and the boys had a blast. There was a bouncy house, and a TON of pumpkins. 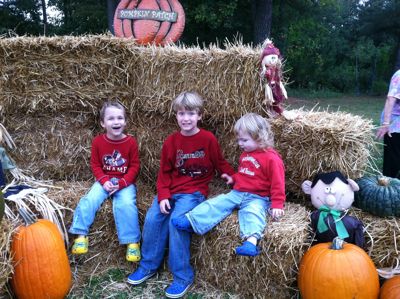 Now I was WAY too cheap to fork over the THIRTY FIVE AMERICAN DOLLARS for a big carving pumpkin (I'm all for supporting a church fund raiser, but really??) But I did fork over $5 for ten little pumpkins for the boys to decorate at home. Let me show you how my monkey math worked out Thursday evening. 10 little pumpkins + 1 box of markers = 25 minutes of something close to peace and quiet for Mama! I'm calling that $5 well spent! Check out their happy pumpkin tower. 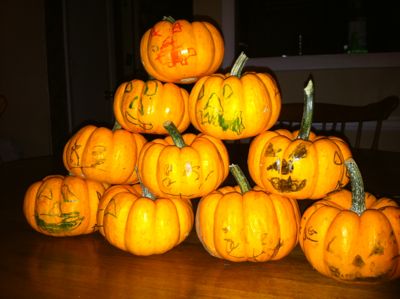 For the record, I made it to the pumpkin patch part of the blog before I ran out of time - pretty darned close. WAY over on the 600 word count, though. Sigh. More later - stay tuned!