Sonia Leigh and the Honor Roll...

So it's been a while since I've updated the blog. It was never my intention to stop blogging - somehow, life just takes over, I guess. Forget New Year's Resolutions, my new February Resolution is to blog at least once a week, like it or not. So here goes nothing...

I'm not going to attempt to play catch up in one marathon blog post. Don't worry - I'll fill you in on what we've been up to, sooner or later...;) We're gonna dive right in to the good stuff - no, the GREAT stuff. The AMAZING stuff! Aidan made the Honor Roll. On his very first quarter back at school. AIDAN MADE THE HONOR ROLL!! How awesome is that?? See? 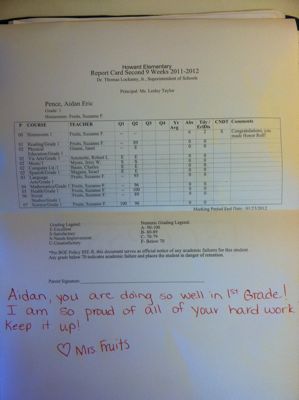 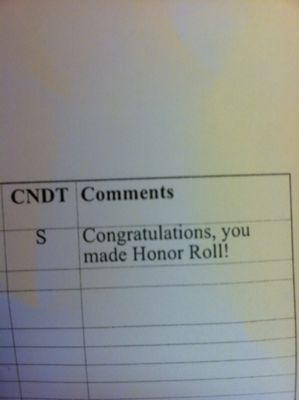 We are SO proud of our little man! He has worked SO hard - at Brain Balance, at home, and especially at school. His progress has been nothing short of a miracle for our whole family! We thought that making the Honor Roll deserved a special reward, and Aidan agreed. Any other kid might ask for a new video game, maybe a trip to Chuck-E-Cheese...but not my little rock star! Without missing a beat, Aidan said, "Mom, what I'd really like to do is go see Sonia Leigh again." Well, that might be tricky. And expensive. (Seriously, though - how cool is my kid??) But wait...I found out through the Fam-O-Leigh (Sonia's awesome fan club) about a free show at Criminal Records in Little Five Points last Sunday afternoon. A-HA! We finagled a babysitter for the little boys (Thanks Mimi and Aunt Cassie) and made our plans. Of course, we had to be there early to get one of the awesome Fam-O-Leigh shirts that Michael Lay had made for the first 30 fan club members at the record store. 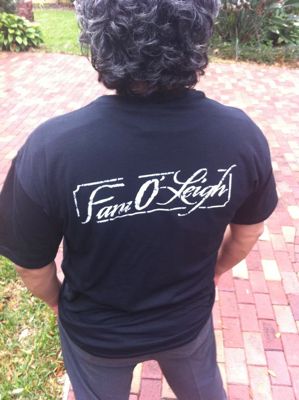 We left Savannah at 6:30 am, and made it to Criminal Records around 10:45am. And yes, we each got a shirt! We hung out, street teamed a little, and had lunch with a big group of Fam-O-Leigh! Aidan and the fabulous Miss Susie amused themselves at lunch with coasters, duct tape and a sharpie! Viola! Art! 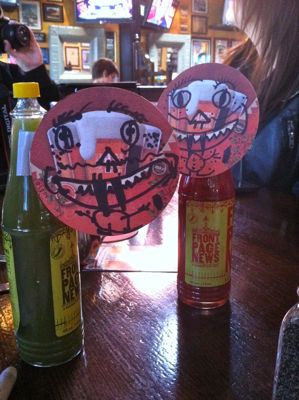 After lunch, we headed back to the record store for Sonia's performance. Aidan and I were front and center (of course), and there was a great turnout for the show. 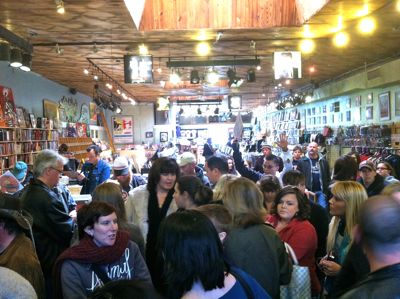 Sonia and the band were all smiles as they took the stage. They opened the show with "I Got Loaded," paying homage to blues musician and Sonia's best friend, Sean Costello. 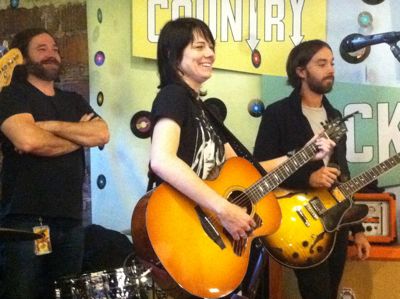 Then came a new song, "Alabama," for a certain Fam-O-Leigh member who has claimed it as his theme song! And Sonia sang the song right to him! Awesome!


And the whole band never stopped smiling, the entire time! They were clearly having SO much fun, taking requests, letting the crowd sing along, and rockin' the house! Everyone on that stage was clearly having a blast, and their vibe was positively infectious! Sonia even played a song for Aidan! He asked her to play "Skeletons," and she responded, "Sure, buddy. I'll play that one for ya!" And it was the very next song - Aidan is STILL bragging about that one! 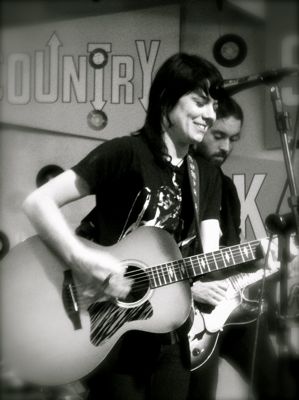 Sonia and the boys really mixed up the set list, playing new songs from 1978 December like "I won't tell" and "Ain't Dead Yet," and older fan favorites (and sing-alongs) like "Frozen Bed" and "A Poem from the Ocean Floor." Of course, they played Sonia's first single, "My Name is Money," and her newest radio single "Bar." (Everyone, quick - go call your local radio station and request it!) Sonia even pulled local musician, Hannah Thomas, onstage to help sing "Bar," and she did a great job! 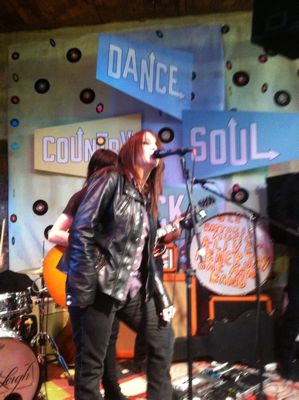 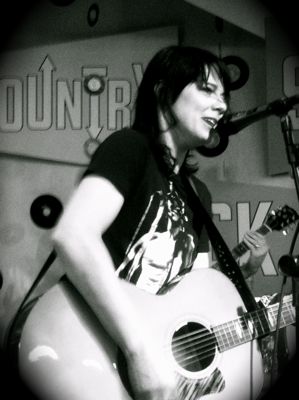 Now, I've been to a LOT of shows - everywhere from bars to arenas. This show was without a doubt, one of the coolest, most FUN shows I've been a part of! EVERYONE in Criminal Records was having SO much fun! Sonia and the band, the fans, the record store employees - EVERYONE! 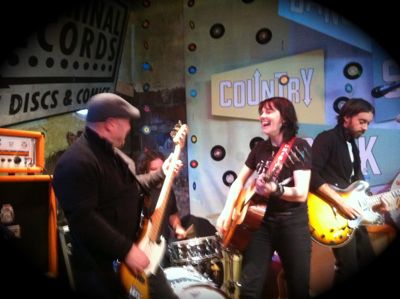 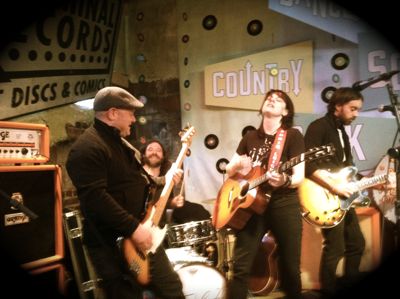 After at least the third time that Sonia said this would be their last song, they played an extremely heartfelt "1978 December" for her parents in the crowd. So much emotion, such a beautiful job. 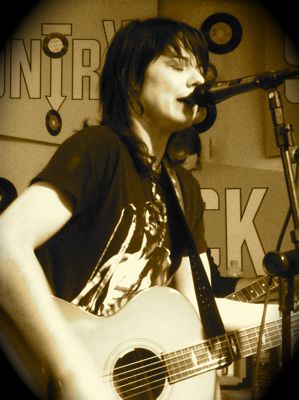 They closed out the show with a cover of a song called "Valerie," and the jury is still out on who originally performed that song. Shila and I thought it sounded very Sprinsteen-ish - and we all know Sonia LOVES the Boss. Someone in the Fam-O-Leigh suggested it was an Amy Winehouse song. Sonia, if you're reading this, care to weigh in? Just because I really liked the song and I'm curious! ;) AMAZING show! Absolutely worth every second of the long drive from Savannah to Atlanta and back (all in one day, too!)

After the show, Sonia and the band hung around in the record store, signing autographs, taking pictures, and chatting with fans. The fabulous Mike Rizzi hooked Aidan up with drumsticks yet again, and this time, Aidan got the whole band to sign them! (And every single person, except Mike, made a comment about how difficult is was to sign drumsticks! You folks all did an awesome job!) 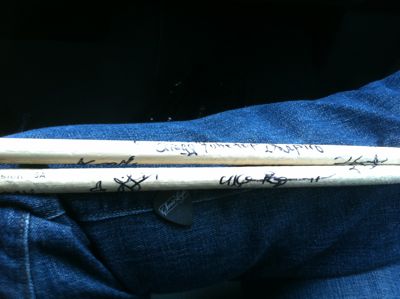 Now I should mention that later that night, Sonia Leigh and her band opened up for Willie Nelson at the Tabernacle. There was gear to move, and sound checks to do when they got there. But they still made time to connect with the fans. This, to me, is what sets Sonia Leigh and all of the Southern Ground Artists apart - that connection with their fans. I hope that the future holds wild and crazy success for Sonia...but I also hope that she'll always have time for a quick hug and and a high five after the show! And maybe even a photo...like this one, which i LOVE! 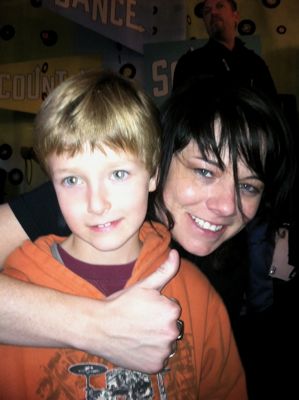 Of course, hanging with the Fam-O-Leigh was awesome! Shila, John RTP, CC, Dylan, Hannah - it was great to meet y'all and hang out! Susie and Ginger - ALWAYS a pleasure! We hope to see everyone again very soon, and to meet many more Fam-O-Leigh mambers in the future! Michael Lay, we missed you terribly and we LOVE our awesome shirts! THANK YOU!

And finally, this day would NOT have been possible without Brain Balance. That program has truly changed Aidan's life, and I LOVE all of the things we get to do with Aidan now. Like travel 5 hours each way in a car, with NO movies and only a few minutes of video games. Like having lunch in a crowded restaurant, in a group of 20+ people and not having to leave early or endure a single embarrassing scene. Not ONE! Like standing front and center, jamming along to one of our very favorite artists, watching Aidan having a blast and singing along to every single word! THANK YOU BRAIN BALANCE! And thank you Sonia, Mike, Gregg, Will, Jacob, and David for rockin' our faces off!